The Rise of Ideologies – How Christ Handled Science, Society and Politics 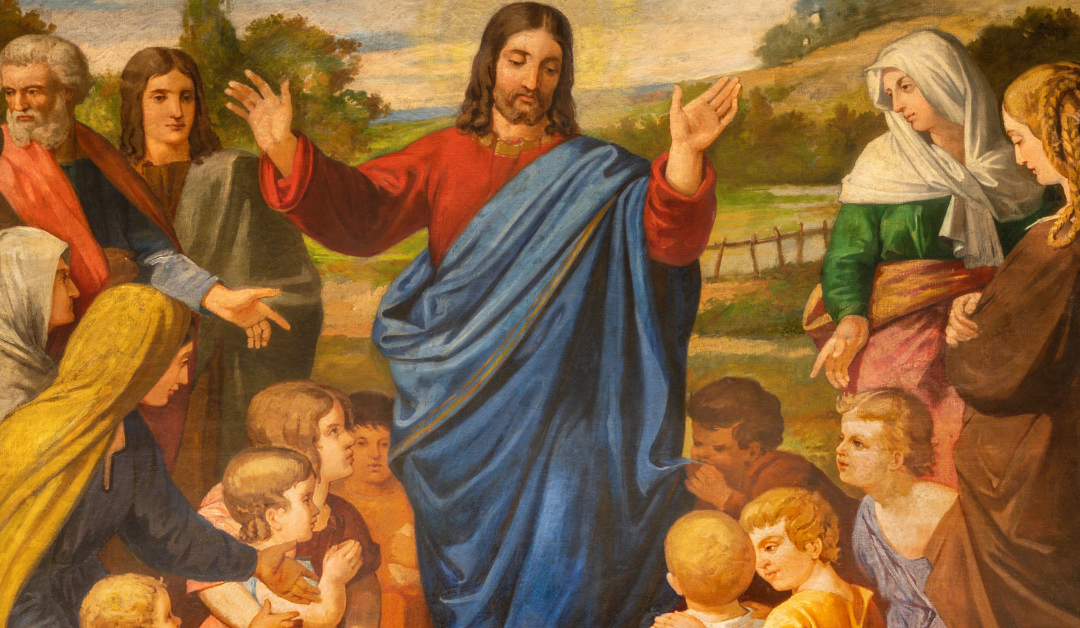 Tommie Farrell currently serves as 1st Counselor in the Abilene Texas Stake. He has served as Ward Mission Leader, Elders Quorum President, and Bishop. Favorite callings of his past have been Primary Teacher, Temple Ordinance Worker in Lubbock Texas Temple during the first years in operation and as a Scout Master just prior to his current calling. He has been married to Karen Farrell for 26 years and they have four fantastic children at ages 25, 20, 17 and 13. He has been a physician for 20 years with 15 years of these dedicated completely to the field of Hospice and Palliative Medicine where he gets to care for patients and families with critical illness and end-of-life care.

One of the most unexpected and fascinating developments during the pandemic was the rise of ideologies. There were issues involving medical science, social issues and politics that crossed religious lines. For many of us we found ourselves in positions where people we considered to be like us stood on other sides of an issue. As I watched this unfold in my life and the lives of my friends, I, like many of you, pondered on how to navigate this and remain a true friend and, most importantly, remain a true Disciple of Christ. I especially ached when I had any friend let these differences in opinion lead them to question their place in the Church of Jesus Christ.

As I prayed and pondered, I happened upon this thought about our Savior’s earthly ministry that I share humbly for others to accept or reject. It is in regard to how the Savior addressed the scientific/medical, social and political wrongs present while He was here in His earthly ministry.

Spiritual Truths Instead of Medical “Truths”

I am a medical doctor. I don’t share this to give my medical advice on any current issues. I say this to share that during the time our Savior walked the earth the medical dogma regarding leprosy was incomplete. Our Savior would have known this. He created humans and understood how disease works. He chose to heal instead of correcting scientific inaccuracies. He didn’t tell the healed to go explain that he had removed the underlying infection that had caused the nerves to fail in the ability to self-protect the body from injury. He didn’t tell them they were now no longer in danger of developing infected wounds that could spread germs to others. He instead asked them to go show themselves to the Priest and keep the traditions of the day that signified they had been healed.

He chose over and over again to heal and focus the subsequent teaching on spiritual truths instead of medical. The woman who had an “issue of blood” (Luke 8:43-48) and had “spent all her living upon physicians” was healed by merely touching the Savior’s garments and connecting to His virtuous power. He did not explain how He had done what medical science of the time could not. Instead, He comforted her and taught, “thy faith had made thee whole; go in peace (v. 48)”

We too can go in peace when it comes to matters of science. One perspective I can share having been a physician for 18 years is that medical “facts” that I had been taught in medical school are now myths and a “truth” shown strongly in a series of studies can later be proven to be an error. This will continue in science. Because of this I would never link my testimony on any scientific matter.

Slavery existed in the provinces He taught within, but He did not end this social injustice. There is no doubt that Christ would recognize this as an abomination. It really is a self-evident truth that all of us are created equal. He already felt a love for each of us individually before we came to this Earth. He had offered to come down and be the “great and last sacrifice (Alma 34:10).” God would never have wanted slavery, sexism, prejudice to exist at that time in history or during our own time. But, as done in the council of heaven, He continued during His earthly ministry and did not take away the agency of humans, even in their freedom to harm and exploit each other.

This is not to mean He tolerated us treating each other poorly. He taught in His actions how we should treat each other and did go against traditional norms especially in how He treated and included women, children and people of different social classes. One of the main criticisms consistently levied against Him was His policy of inclusion – see Mark 2:16, Matthew 9:10-11, Luke 5:30.

However, the only slavery He addressed was the slavery sin has over each of us. He came to free us from sin and that was His focus (Romans 6). One experience of our Savior was particularly poignant in teaching this. In Luke chapter 7 it is told that while the Savior ate at the house of a Pharisee a woman who was a sinner came and washed Jesus’s feet with her tears and wiped them with her hair. The Pharisee judged both her and the Savior in thinking, “This man, if he were a prophet, would have known who and what manner of woman this is that toucheth him (v. 39).” Jesus taught the lesson that focused on not who she was but on her example of love, service, and gratitude. He ended the interaction by freeing her from the burden that she carried and simply said, “Thy sins are forgiven (v. 48).”

Treat Everyone With Love and Respect

There still exists social injustice in our world. The Lord invites the members of His church to treat everyone with love and respect. Indeed, to enter the temple we must answer the question that our private and public behaviors with family members and others are consistent with the teachings of the Church of Jesus Christ. Yet our focus is less on changing society as much as bringing individuals to the Savior through the covenants of the Gospel and letting the Savior change each of us into persons who would respect all God’s children. We don’t look to the Church for social policy, instead we, as a Church, look towards and follow our Savior’s example.

My Kingdom Is Not of This World

The governments, both the Jewish and Roman rule, were corrupt. He did not take the time to address or establish a new political system. In fact, He was given opportunities to speak to such and chose not to make this the focus of His teachings. When asked if it was lawful to pay tribute to a government ruler, he gave the reply that separated the worldly and spiritual – “Render therefore unto Cæsar the things which are Cæsar’s; and unto God the things that are God’s (Matthew 22:21).”

Volumes have been written on all the unlawful actions taken when Christ was arrested, tried and crucified. These actions were egregious enough that Jesus could have legitimately protested how He was being treated. But while being unlawfully prosecuted by the high priest, He did not correct the many mistakes being made in Jewish law, instead “Jesus held his peace (Matthew 26:63).” His purpose, once again, transcended teaching a better political system. As He spoke to Pilate – “My kingdom is not of this world. (John 18:36).”

Every election cycle leaves a part of society feeling that we are in the hands of the wrong leaders. We could hope that only righteous men and women were elected to government offices, but we also know that there have been no perfectly righteous persons born since our Savior was here on Earth. So, we are left to do as instructed in the handbook at this time – “In accordance with local laws, members are encouraged to register to vote and to study issues and candidates carefully. Principles compatible with the gospel may be found in various political parties. Latter-day Saints have a special obligation to seek out and uphold leaders who are honest, good, and wise (General Handbook 38.8.30).” This leaves it where we will likely find other church members and leaders voting for different political leaders than we do. Whomever is elected should have our prayers that they will be guided by true and virtuous principles. But, just as Jesus did, we continue our service in the Gospel independent of the political state around us. And just as He included tax collectors in His circle of disciples and even as one of His Apostles, we can work with persons who belong to a political group that we may not find aligned to our own.

Do Not Get Distracted From Our Mission

Our Savior did not let scientific, social, or political needs distract Him from His mission – to establish the Kingdom of God and perform the work of Salvation. I urge us to not let matters of science/medicine, social practices or politics distract us from what we are about. We are a part of the Gathering of Israel. We hold up the Light and Example of our Savior by living as He lived. Let us not allow the adversary to use those peripheral aspects of this world to become a wedge between us and that core purpose.

What if a statement by a leader, even the First Presidency, leaves you feeling that you are at odds in a matter of science, social policy or politics? I would urge us to not act on this too rashly. Remember that the Lord’s thoughts and ways are higher and different than ours (Isaiah 55:8-9). Which means that we as humans may need some time to understand why something does not align with our thoughts. It may not even mean we are wrong, and the leader is right. In the case of our prophets, seers and revelators, it does mean it is the will of the Lord for this time (Doctrine and Covenants 1:37-38). But even if we don’t understand this timing and why we are not aligned perfectly to it, it does not mean we don’t belong in our place in this Church. Remember the countless examples, only a few of which I shared above, where someone could have been deemed out of the correct status to be in the presence of the Savior – whether by infirmity, social status or their position in the political system of the time. He did not judge them based off previous cleanliness, beliefs or status. He accepted them on the willingness they had to be healed and to follow. So don’t judge yourself out of sync with the Lord’s Church based off one particular point of belief.

Paul describes our Savior’s love by stating, “For I am persuaded, that neither death, nor life, nor angels, nor principalities, nor powers, nor things present, nor things to come, Nor height, nor depth, nor any other creature, shall be able to separate us from the love of God, which is in Christ Jesus our Lord.” (Romans 8:38-39)

We should strive to not let anything of this world separate us from His kingdom as found in The Church of Jesus Christ of Latter-Day Saints.