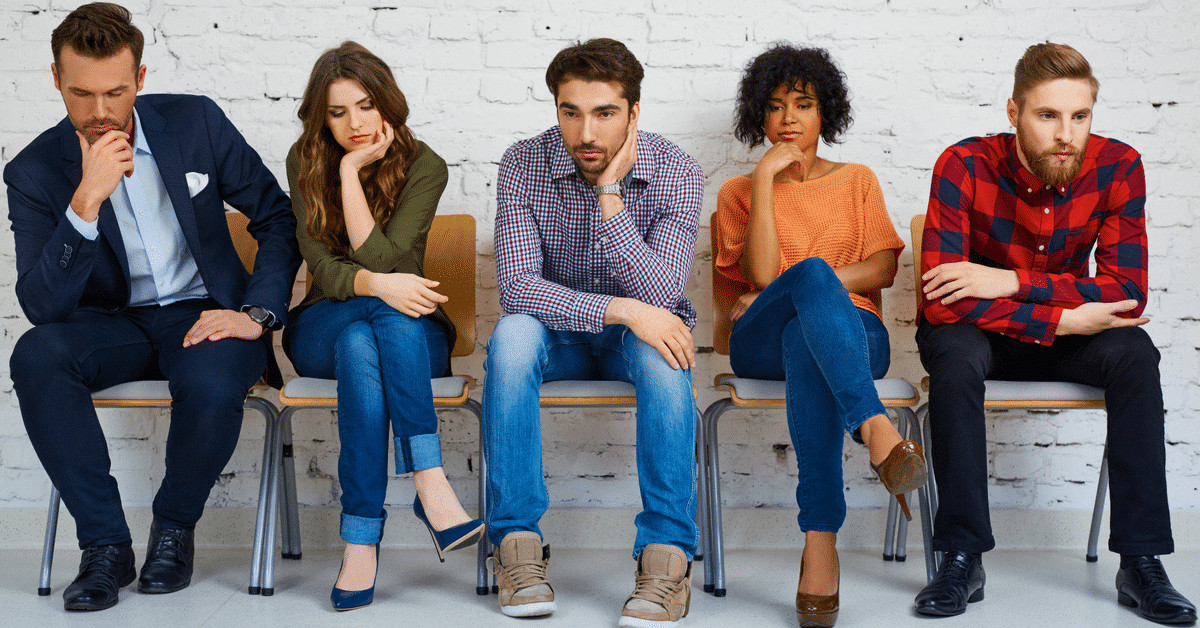 David Ostler is a guest contributor to Leading Saints on the challenges of faith in the 21st century. He and his wife Rachelle serve as Church Service missionaries in their Northern Virginia Stake, focused on faith challenges. He served as a bishop, stake president and with his wife as mission president in Sierra Leone West Africa and Director of the Hill Cumorah Visitor’s Center. He maintains a resource guide on faith challenges at www.stakeandwardresources.org, where this article was originally published, and can be reached for comments or questions at dbostler (at) gmail.com.

What can we learn from professional research and other data sources about faith challenges today?

Whenever even one person leaves the Church, while respecting their choice, we rightly mourn. Missionaries learn in Preach My Gospel, that they should be devastated when someone doesn’t progress as an investigator. For those deeply committed to the Church, we are sad that those who leave don’t see the meaning we did, or felt unwelcome, or that something about the Church failed them, or they couldn’t trust Church leaders, or that their questions were not heard. We are devastated.

We know we live in a unique time of faith. We all have friends and family members who once deeply believed, who no longer attend or no longer believe. In my discussions with leaders, I am asked whether more people are leaving today than before. Local leaders take their responsibilities seriously and want to know new ways to build faith and minister to those who doubt or lost faith altogether. Family members feel this more keenly because of the depth of love for their children and other family members.

This post highlights data I collected and analyzed, official Church data and three studies by professional researchers. Each give insight to help us understand the depth and significance of faith challenges within our ward, family or as leaders, in our organizations.

What do professional researchers say

In my studies, I read an outstanding study by Benjamin Knoll and Jana Riess in Dialogue, a Journal of Mormon Thought, titled, “Infected with Doubt,”: An empirical overview of belief and non-belief in contemporary American Mormonism, Winter 2017, p. 1-37. It’s a fascinating study and one worth reading by anyone interested in belief and doubt among today’s Mormons. Its analysis included two surveys, one of self-identified Mormons and one of self-identified former Mormons. Using the former Mormon survey, Knoll and Reiss concludes, “We can also briefly take a closer look at what age former Mormons tend to disaffiliate from their Mormon identities. Former Mormons were asked: ‘About how old were you when you stopped identifying as a member of the LDS Church?’ Among all former Mormon respondents, the average age is 21. This does not vary much by age cohort, though there appears to be a trend for disaffiliation at younger ages: the average age of de-identification for former Mormons who are currently Millennials is 18.4, Generation X is 21.1, and those of the Boomer or Silent generation is 23.7. Clearly young adulthood is the age when most former Mormons leave the fold, regardless of what age they are now.”

Former Mormons leave at a younger age than before.

A 6% change in adult retention in a 7-year period is significant and important. So, with help, I drilled into the Pew data to see what it meant. Here is what Pew shows:

Using this data, in 2014, there were 360,000 more adults who are former LDS. With 14,018 congregations in the US in 2014 that translates into 25 more former LDS adults per congregation in the US between 2007 and 2014. In a stake of 8 wards, that means 200 adults no longer affiliate as LDS, enough for a ward. If each of these adults formerly contributed even $1000 per year in tithing or other donations, that would be a decrease of $386 million annually.

I express caution into this interpretation and use of the Pew data. The survey has statistical limitations and ranges of error. But, an increase of 25 former adult LDS per congregation is the implied best guess.

Sherkat measures this based on when the individual was born. Here are his findings:

For Mormons born between 1956-1970, 71.2% stay Mormon, slightly higher than the 68.6% average for all religions. It is lower for Catholics and Jews and higher than many Protestant Churches, and roughly the same for Baptists. But, looking at those born between 1971-1994, the Mormon loyalty rate declines to 61.2%. This is a 10% decline between these age groups. Only Unitarians had a larger decline. The next largest decline was for Catholics at 4.5%. Some religions had increases. Sherkat said, “Mormons also have high rates of loyalty in generations born before 1971, but in the youngest cohorts, loyalty drops to 61% and ranks Mormons among the least loyal groups in the youngest generation.”

When looking at Religious Leaving, we can see the generational changes with younger adults leaving at a far greater rate than earlier generations. The 27.1% for the youngest generation is highest for any measured religion. The next highest is 21.9% for Liberal Protestants.

So, what does Church published information show?

Each year the Church publishes a statistical summary of membership and congregations by country. I accessed it through Cumorah.com a privately funded initiative that has organized Church statistics. The data below shows membership and wards and stakes by year for the United States: 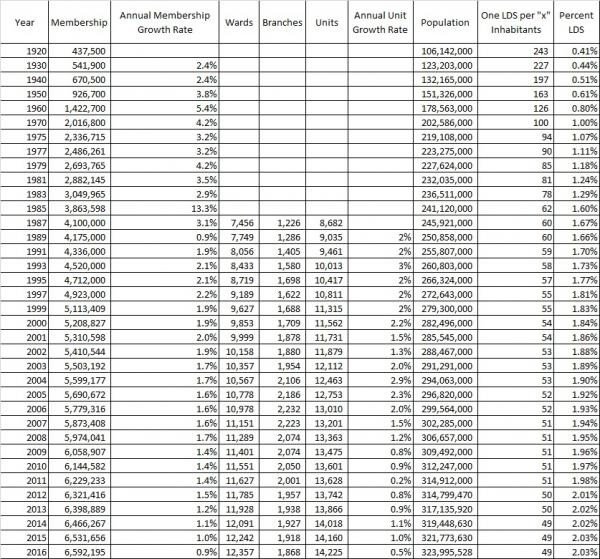 The table above comes from Cumorah.com.

There are several interesting statistics. Overall Church growth in the US has slowed in recent years to less than 2% annually, likely because of a declining birthrate and lower rates of converts. But, for each year since 2007, the rate of membership growth has been higher than the increase in new congregations. For growth in members to exceed growth in congregations, either there is a higher dropout rate, or congregations are getting larger. For the last 10 years, there has been an increase of 12.2% in membership, but an only 7.7% increase in wards and branches. This means the average congregation grew by 4.25% or 18.5 members.

We can’t use the data to conclude definitely that the dropout rate has increased, but something has been changed. I believe many leaders have a natural wish to create new units—showing growth and progress. So, I suspect that much of this slowdown is from a higher dropout rate.

Data from my leadership survey

I conducted a survey with Leading Saints (www.leadingsaints.org) in May 2018. I asked stake and ward leaders to respond to 135 statements about their own faith and about the faith challenges they see in their ward, stake and organization. I received 514 qualified responses.

For the survey, I defined faith crisis as, when “a person discovers new information about the church and enters a state of intense dissonance and stress resulting in a loss of faith in some or all foundational truth claims.” Here is summary of responses for one of the questions: 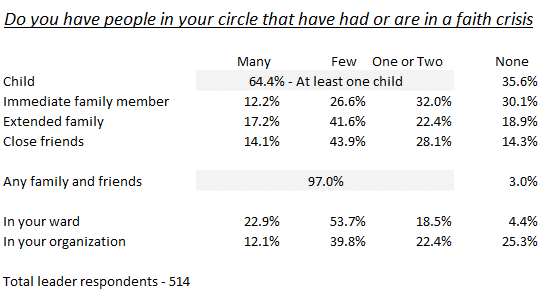 I would love to go back in time and ask this question 20 or 40 years ago. I suspect that our answers would be very different. In the 90s, I served as a bishop and stake president. During this time, I ministered to only a few people considering leaving the Church. We face a different challenge today.

Here are the results to another question:

Only a few believe addressing it is unimportant. We are most sensitive about faith within our families.

I asked questions about whether leaders think they are receiving training about faith crisis or have confidence in their or their ward’s ability to minister to those in a faith crisis. Here are the findings: 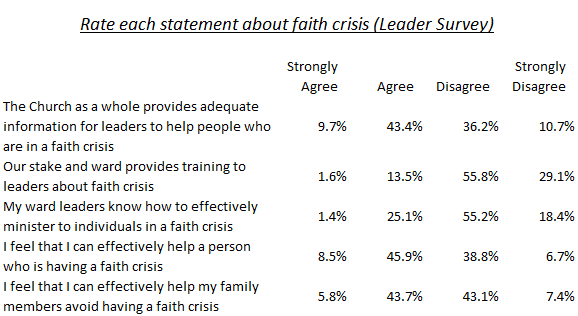 Remember, this survey is of local church leaders. This table was a surprise. Stake and ward leaders gave mixed opinions on whether the Church provides adequate material to address faith challenges. They report that wards and stakes are not providing any training. The lack of confidence in ward leaders around their ability to minister in a faith crisis surprised me.

Leaders see addressing faith challenges as a very important topic but say they are not receiving materials and training and have low confidence in their local leaders ability to address it. I interpret the data to show that something is different today; leaders worry and have a lack of confidence in how to respond.

In another survey which I conducted with a group of Mormons that consider themselves in a faith crisis, they had little confidence in the materials provided by the Church, training by stake and ward leaders and don’t believe that local leaders are effective in responding to faith crisis. Here are their responses:

This survey is of the very members we are at risk of losing and they have no confidence in materials from the Church, training within the stake and ward and the ability of their leaders to understand and minister to their needs. If we are unable to understand them, I fear that these trends of disaffiliation will continue.

In different ways, these all highlight that today is different. We are losing more members than in times past and at least for the youngest adult generation, we are losing them more than other religions. Our ward and stake leaders recognize this as an important issue, because it’s happening in their families, with their friends and in their congregations and organizations. But, they aren’t receiving training from the stake and ward leaders. They are not confident that their ward leaders understand how to address it in their home and they are unsure whether they can be effective in their families.

Some may treat this as a sign of the times, when the very elect will be deceived, or we are at the end-times where there is a sifting and a separation of the wheat and tares.

But, I believe the Lord wants us as local members and leaders to council on how we can better understand the underlying reasons someone would leave and how we can better respond. We need to include a broad perspective as we council, making sure we have men and women, with different backgrounds and from different generations. We should listen to those who leave and understand why they felt they could no longer believe. Being humble, we can be prayerful about what changes we can make to help people be more welcome and included, where they can trust the Church and its leaders and find more meaning and relevance in our doctrines and the Gospel of Jesus Christ.

I previously posted additional research I did that focuses on the question of whether leaders understand members who are in a faith crisis. The short answer is no. Here is the research.