The One Thing Bishops Worry Most About During Church-at-Home, and Why They Should Stop 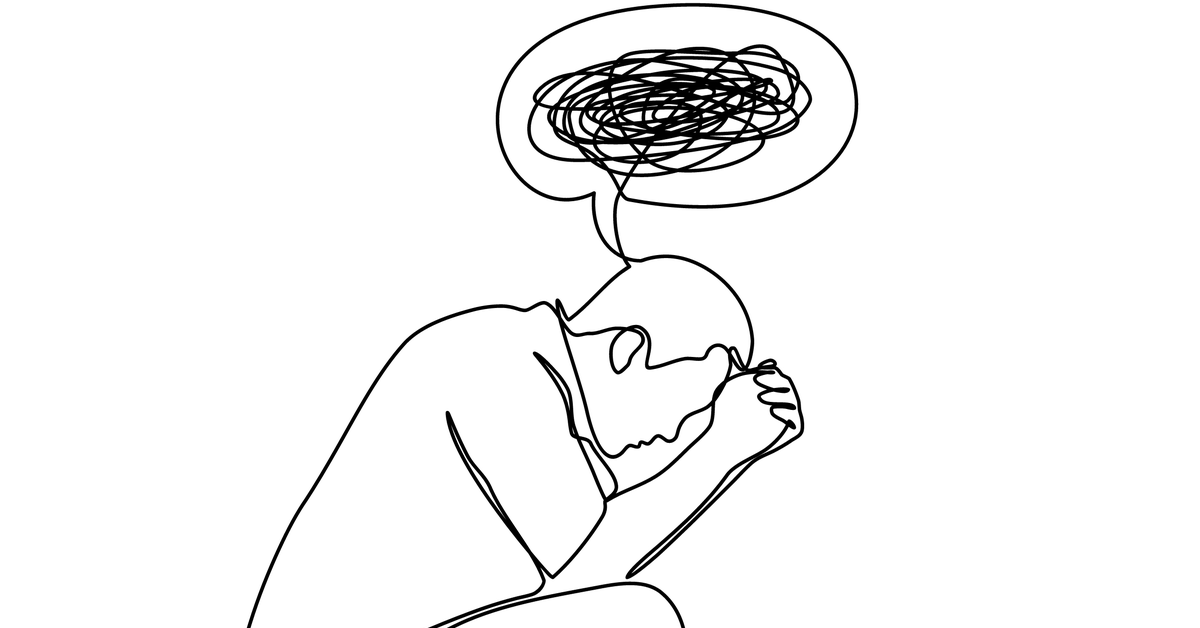 Dan Duckworth is the founder of Crux Central, a leadership development company that helps changemakers level-up their leadership performance. He writes and podcasts at danduckworth.net and hosts high-intensity leadership workshops at cruxworkshops.com. He’s also a member of the Leading Saints board of directors.

So do Relief Society Presidents, for that matter.

Bishops worry about their flat ward councils, their unstaffed primaries, the couple in crisis, the teen who doesn’t show up, and whether the stake president approves.

But how about during a pandemic, when Church-at-church is replaced by Church-at-home? What do bishops worry about then?

It turns out, they worry a lot about not knowing what to worry about.

Kurt Francom recently asked the Leading Saints audience a question that gave us clear insight into the concerns that are weighing on bishops and other lay church leaders as they navigate the global crisis.

As a member of the Leading Saints board, I’ve spent considerable time analyzing the 318 responses to Kurt’s survey, digging for insights into how we can best serve our audience.

Here’s a breakdown of the survey respondents by location and calling: 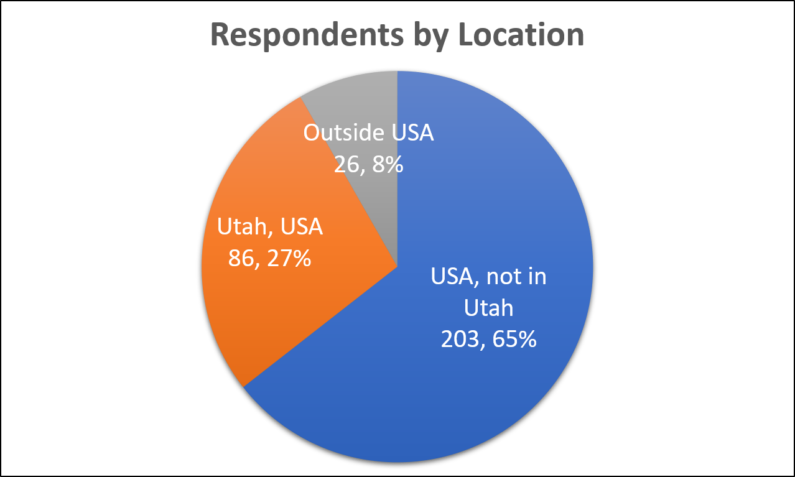 *3 respondents did not identify their location 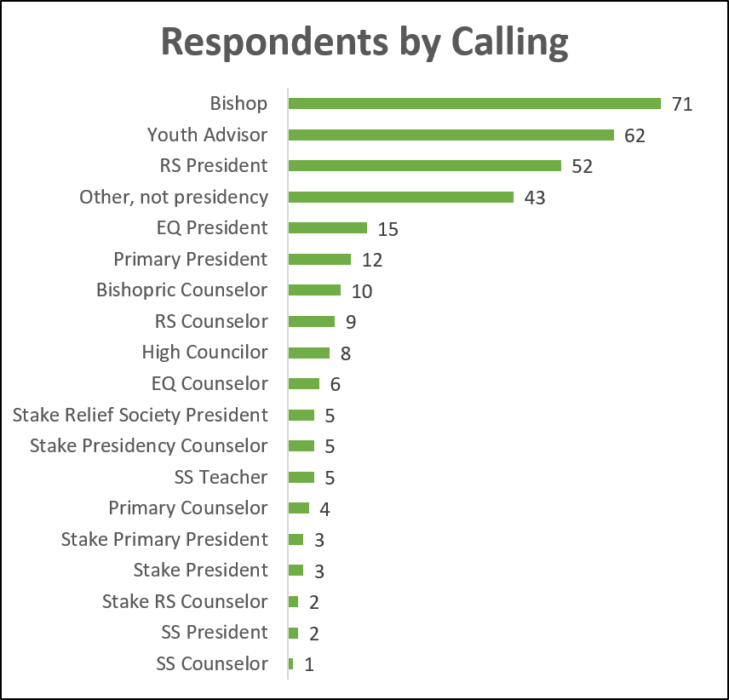 The insights in the survey were intriguing. But I wanted to add some color to them, to make sure I wasn’t layering in my own interpretations.

So I also interviewed two bishops–one who serves in Alberta, Canada and another who serves in Michigan, USA–to dive deeply into their experiences leading their wards through the COVID-19 crisis.

The One Takeaway That Surprised Me

After this project, I can conclusively state that the vast majority of bishops and lay leaders in the Church operate from a transactional mindset. That is, they are addicted to problem-solving.

That makes them normal. And that’s nothing new. I’ve known as much just through observation.

And yet there was one takeaway from the survey and interviews that did surprise me:

This phenomenon was evident in the survey responses, but became crystal clear in my Zoom call with one of the bishops.

He described his ward as faring well through the crisis. He said he’s not aware of any issues. “My ward is incredible,” he reported. “We have very few underperformers.”

And yet, in the very next statement, he expressed worry:

“It’s been really hard to figure out what I can offer and how I can support these members in the things that they’re doing, knowing that the things I’m offering and the way I’m offering them aren’t going to reach the people who need to absorb it.”

Did you pick up the non sequitur in this sequence? (A non sequitur occurs when a statement does not logically follow a preceding statement.)

Right after the bishop acknowledged he’s discovered no evidence of problems, he worried he’s not effectively solving those problems-that-don’t-exist.

And, according to the survey, he’s not alone.

The 5 things on Bishops’ Minds

It wasn’t easy to make conclusions from the survey, as it’s primary question was open-ended:

Yet as I studied the 71 bishops’ responses, one meta theme emerged. Our bishops’ primary challenge lies in not knowing.

Here are the 5 concerns most commonly expressed by the 71 bishops who responded:

Each of these themes comes back to a common point: the bishops have “lost touch”.

Think about. For those of you who’ve served as bishops or members of ward councils, what is often the predominant focus of our leadership meetings?

Is it not, to keep the bishop informed?

What “need” characterizes much of the nature of our formal ministering program, including stewardship interviews and reporting?

Is it not, to keep the bishop informed?

It seems natural, then, that when the plug is suddenly pulled on Church-at-church, the bishops feel unnervingly “in the dark”.

Why Do Leaders Want to Connect?

It’s not just bishops who are longing to know.

One of the most commonly used words in the survey responses was connect. It (or one of its derivatives) was used 99 times.

I wanted to know more about what people meant by “connect”, so I analyzed all 95 entries that employed it. Here’s what I found: 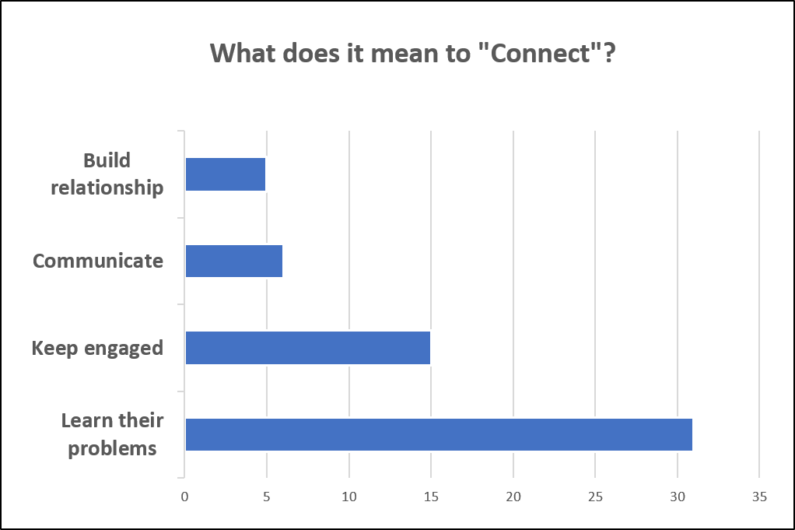 Of the 95 entries that used the word “connect”, I couldn’t decipher the meaning in 38 of them.

As in, “No connection with ward leaders”.

Or, “Lack of ability to connect in person.”

From the other 57 entries, though, I could discern 4 values behind “connection”.

Three of these values typify what is called a transactional leadership style:

In other words, 91% of the time respondents spoke about “connection”, it was because they were worried about problems.

From only 5 of the entries that spoke about “connection” could I decipher an element of what is called transformational leadership:

A desire to build meaningful, supportive relationships that are not characterized by problem-solving.

As in, “[It’s a struggle to] connect with members (and particularly youth) at a deeper level than superficial.”

Worrying Is a Waste of Time and Energy

Psychologists distinguish between two types of worry: real-event worry and hypothetical-event worry. It’s the difference between thinking about problems that actually exist versus fretting over problems that may exist, either in the present or the future.

And guess what? 91% of the things we worry about never happen. And the 9% that do happen turn out better than we imagined they would.

Here’s the difference, played out in a Church-at-home scenario:

As famed psychologist Mihaly Csikszentmihalyi has argued, attention is the equivalent of psychic energy. Energy is the capacity to do work, and we only do work we give our attention to.

There’s a Better Way to Use Your Thinker

It’s called pondering. Pondering is the productive alternative to worrying.

Remember the bishop I talked to who said he had no problems but worried he wasn’t solving those problems effectively?

When I pointed out his contradictory thinking, he spoke authentically:

“Lately, I’ve been debating the difference between worrying and pondering. During the day, at night, in my idle time, I worry. I don’t ponder. And all I have right now is my worry. I don’t have a church meeting to distract myself. All I have is my thoughts, worrying about how people are doing. I end up projecting my concerns on members, thinking they need all these things. When maybe they’ll be just fine.”

This statement is incredibly insightful. It corroborates the truths that 1) worrying is a way of organizing our cluttered thoughts, especially when we feel powerless to act or influence, and 2) we’re prone to worry about problems that most likely will never occur.

But it also reveals the antidote to worrying. Did you catch it? It’s not, as many are inclined to believe, doing or acting. It’s pondering.

Pondering means to “think about (something) carefully, especially before making a decision or reaching a conclusion.”

The point of pondering, or what we call “disciplined reflection” in our leadership workshops, is to become more aware. Or rather, to increase the accuracy of our awareness.

That makes pondering a key component of what is popularly referred to today as “mindfulness.”

Pondering Is a Form of Work

Pondering is not laissez-faire leadership.

The Bible Dictionary calls prayer a form of work. It’s counterintuitive to think about kneeling down in your closet as a form of work. Pondering is a similar type of work.

Take Hyrum Smith and D&C 11 as an example. Hyrum was eager to do something, to go preach the newly restored gospel. He was eager to solve a problem that in the Lord’s mind didn’t exist.

The Lord told him, “hold your peace”, “be patient”, and “wait a little longer.” He said, don’t “suppose that you are called to preach until you are called.”

In other words, don’t be hasty. Don’t make up problems to solve. Don’t “make work”.

But the Lord didn’t tell Hyrum to take it easy, or go on vacation. Instead, he commanded him to do the work of pondering. A work that young Joseph had mastered and to which Hyrum was but a novice.

Notice the poignancy of the verbs the Lord uses to teach Hyrum what it means to ponder: appeal, cleave, keep, obtain, study, seek, build, deny not, treasure up. And to do all that with his “might, mind, and strength.”

What would it mean for a bishop or relief society president to use the remainder of the pandemic period to do the work of pondering with all his or her might, mind, and strength?

What would it mean for a ward council or a presidency to likewise do the work of pondering?

What would they discover? How might the future change?

Worrying and Pondering Are Both Mindsets

The bishop said, “During the day, at night, in my idle time, I worry.”

This reflects a mindset, not a skill-set.

Shifting from worrying to pondering — from a transactional mindset to the transformational mindset — isn’t about learning new skills.

It’s about putting on a new lens, about adopting a new way to see yourself, the others, and the world.

You don’t change mindsets overnight. But you can change them. This is the kind of transformation we work on in our leadership workshops.

To get you started, here are some principle-based exercises you can adapt to your situation:

1. You need to journal. Every time you begin to worry, grab the journal and answer:

The idea that the bishop or relief society president is “too big to fail” or “too celestial to receive feedback” has got to go. You need feedback on your leadership performance, now more than ever.

You need mentors. People who understand the leader you’re trying to grow into and who have a line of sight into your behavior at key moments.

Your spouse or adult or mature teenage children might be best. Or a supportive, understanding counselor. But look beyond traditional roles. Don’t look to “yes-men” and don’t rely on someone who’s been a great bishop or relief society president in the past. Find someone who knows how to ask insightful questions and give authentic feedback.

Sit down with these people often.

3. Do the work of pondering your own performance

Once a week on Sundays, when you feel the need to be busy, busy yourself by deeply reflecting on your personal leadership development over the past week. Reflect, in writing, on these questions:

Worrying is exhausting. And nonproductive.

When leaders can’t directly solve a problem, it seems like worrying is all they have left to do.

There’s another form of thinking, another way to organize your mind as you go about your day. It’s called pondering.

Pondering is energizing. It restores peace. And it invites the Holy Spirit to guide our actions.

Why? Because it increases our awareness to the truth. The truth about ourselves, the others, and the Lord.

And when we see all those things as they really are, we’ll stop fretting.

We’ll discover how to be “anxiously engaged” without feeling anxious.