Is Your Elders Quorum or Relief Society Psychologically Safe? 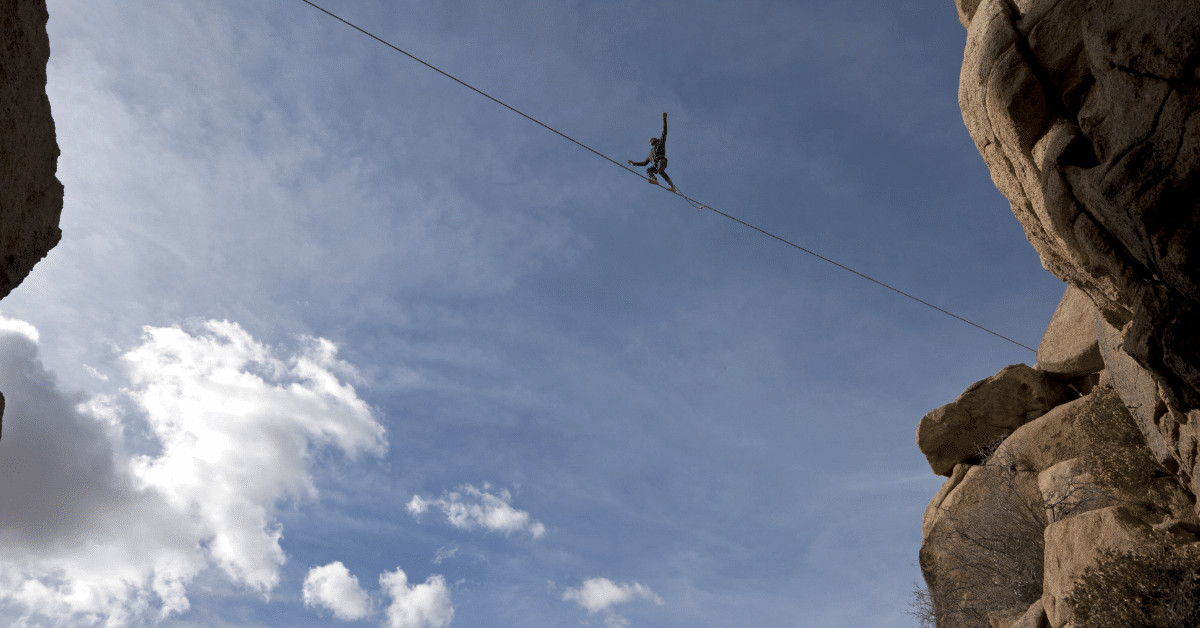 Shortly after our high priest group and elders quorum were merged together, a newly called presidency member led a discussion about being unified and being an elders quorum where we can all turn to for support.

After the lesson, I approached him and asked him if he felt our quorum was a place where people felt safe and a place they could turn to for support.

I said that I thought that is the case for the 10% who make 90% of the comments. But, I wasn’t sure about the other 90%, let alone those that do not attend.

I then offered to design a survey to go out to the quorum to assess the degree to which members of the quorum felt like the quorum was a psychologically safe and inclusive environment. He was on board, and about six months later, we conducted the survey.

I want to show you some of the results of our survey, but first, let me adequately define what we measured.

The first thing we were interested in looking at was psychological safety. Psychological safety is one’s belief that they can speak up or take risk within a group without fear of negative repercussion from the group.

This has become a very hot topic within organization circles over the past five years as Google found psychological safety to be the most important factor for driving the performance of their top-performing teams; Ed Camull, the former president of Pixar and Walt Disney Animation Studios, proclaimed psychological safety to be critical to Pixar’s success in his great book, Creativity, Inc.; and Ray Dalio, the founder and former CEO of the world’s largest and most successful hedge fund (Bridgewater Associates), stated that psychological safety was key to Bridgewater’s success in his book Principles.

The second thing we were interested in measuring was inclusiveness. This is a concept related to psychological safety, but it represents elders quorum members’ perceptions that they are valued for who they are and included in core decision making. This would help give us a sense of the members’ engagement in the quorum.

Before I show you the results, let me first briefly describe the methods and then ask you some questions about what you would like to see in your elders quorum or relief society.

This survey went out to 77, at least relatively active, members of the elders quorum. I do not know how many members of the quorum that we have in our ward, but my guess is that 77 represents 50-60% of the total number of adult males on our ward list. We ended up getting responses from 36 elders. Thus, the results that you will see represent the perceptions of largely the most active members of the quorum.

Here are some of the items that we asked related to psychological safety and inclusiveness (all answered on a five-point scale ranging from 1-strongly disagree to 5-strongly agree):

Other items we asked about included:

After looking over these items, reflect on the following questions:

Consider the same questions for the other items.

Below are some of our results, with concerning elements in red. We used the following scale: 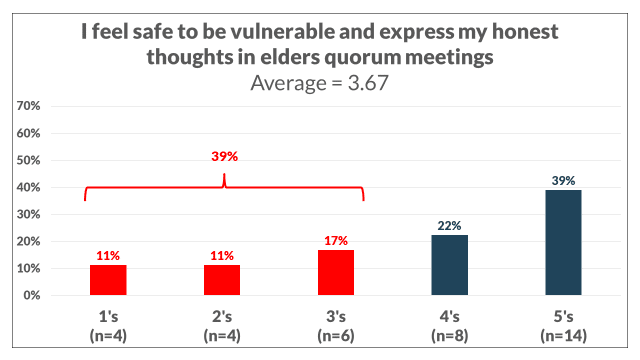 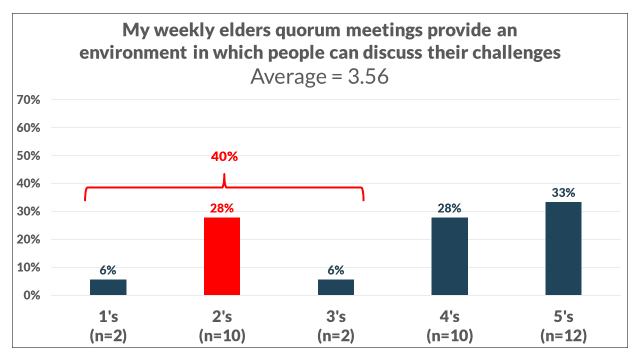 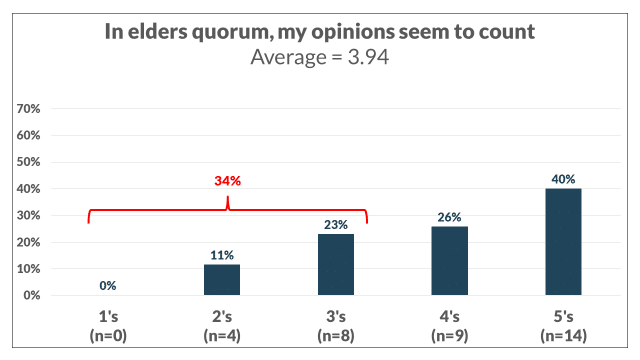 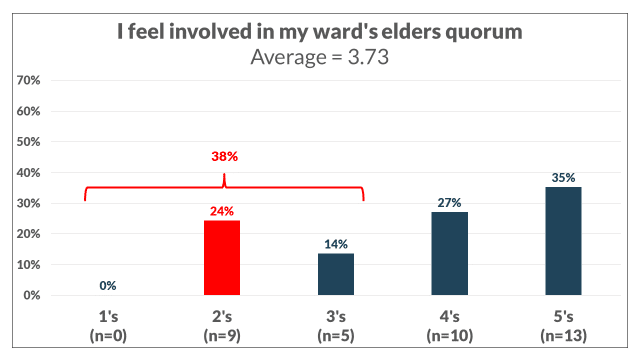 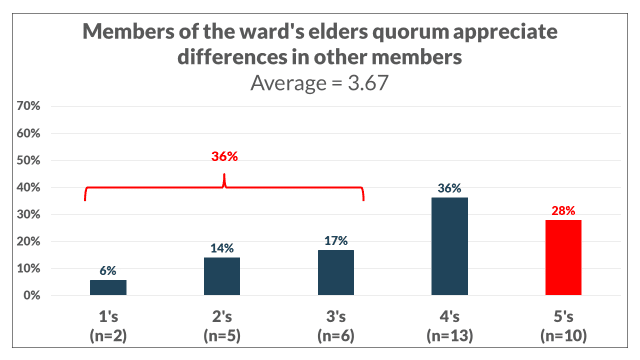 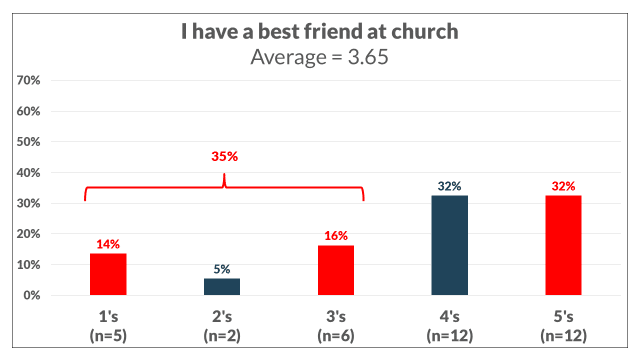 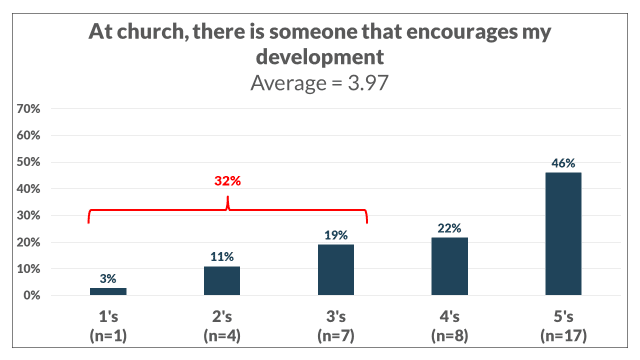 Again, these results come from largely active members and does not include the ones who choose not to attend (perhaps partly because they do not feel like it is a safe and inclusive environment).

Now, having seen the results, consider:

Reactions from Our Elders Quorum

Shortly after I compiled the results and put them into the format above, an elders quorum presidency member showed the results to our quorum. We did not have a lot of time to discuss these results, but there was a moment that occurred that rocked our elders quorum in a good and powerful way.

After presenting the results, the presidency member asked for initial thoughts and impressions from the quorum. The first several comments were largely just clarifying questions as the quorum members were digesting the information. After, there was a lull in the comments for a few moments.

Then, a gentleman who rarely participates in elders quorum raised his hand. He decided to be open and vulnerable (which as you can see is somewhat difficult for members of our quorum to do), and he stated how almost every week he feels like he needs to bite his tongue. That there are things that he has questions about, things that are said that he doesn’t agree with, or things that he is working through personally that he could use some help with, but he never chooses to comment because he fears derailing the teacher and the lesson.

This was a very powerful moment because then the question became: What should we do since there seem to be two competing desires going on: one desire that involves sticking to the “lesson” and “topic” but another desire that involves creating space for difficult questions, disagreement, thoughtful discussion, and even help?

I encourage you to pose that same question to your quorum.

Unfortunately, we ran out of time and were not able to come to any sort of consensus as a quorum, but some of the comments can be summarized as follows, which ranged in opinion:

Essentially, the perspectives were very mixed. Hopefully, our elders quorum presidency will be willing to take inspired action related to the results and improve the culture of our elders quorum.

After the results were presented, I have had a number of different conversations with various members of the quorum, and I have found these conversations interesting because I have essentially only been met with two different reactions. First, I get people that say, “I had no idea that people didn’t feel safe in our quorum.” Essentially, what they say is that because they felt it safe, they figured everyone felt it safe. Second, I get people that say, “I am not surprised.” The findings represent what they expect, and they are hoping that the presidency will do something to improve the culture of the elders quorum for their benefit.

I recently told a friend about what we did and he was anxious to survey the members of his quorum. He presented the idea to his bishop and his bishop encouraged him not to survey the members. While I am not sure why the bishop discouraged this, I want this article to demonstrate the value of gathering information about the perceptions and feelings of your quorum. It is my personal opinion that inspiration comes after information gathering. Yet, it is rare for local church leaders to gather information in a systematic way.

Quite frankly, prior to conducting this survey, our elders quorum presidency felt like the perceptions of the quorum members were much more positive than what they really are. Without gathering this information, they would have not done anything to address the situation. But now, they have an opportunity to wrestle with some challenging questions related to how to better serve the members of the quorum.

In my work with organizations, I have found that there are three primary reasons for leaders not wanting to systematically survey their employees. First, they are concerned that the data may reflect poorly on them. Second, they undervalue the importance of such information. And third, they do not have the time or resources to do so (or at least that is what they tell themselves).

It is my hope that you are a leader that demonstrates that you value those you serve by asking them about their experience within your elders quorum or relief society. It is also my hope that you care more about improving your service than on what the information gathered may say about you and your leadership.