Articulating Problems Will Motivate Solutions | “Come Down” And Lead 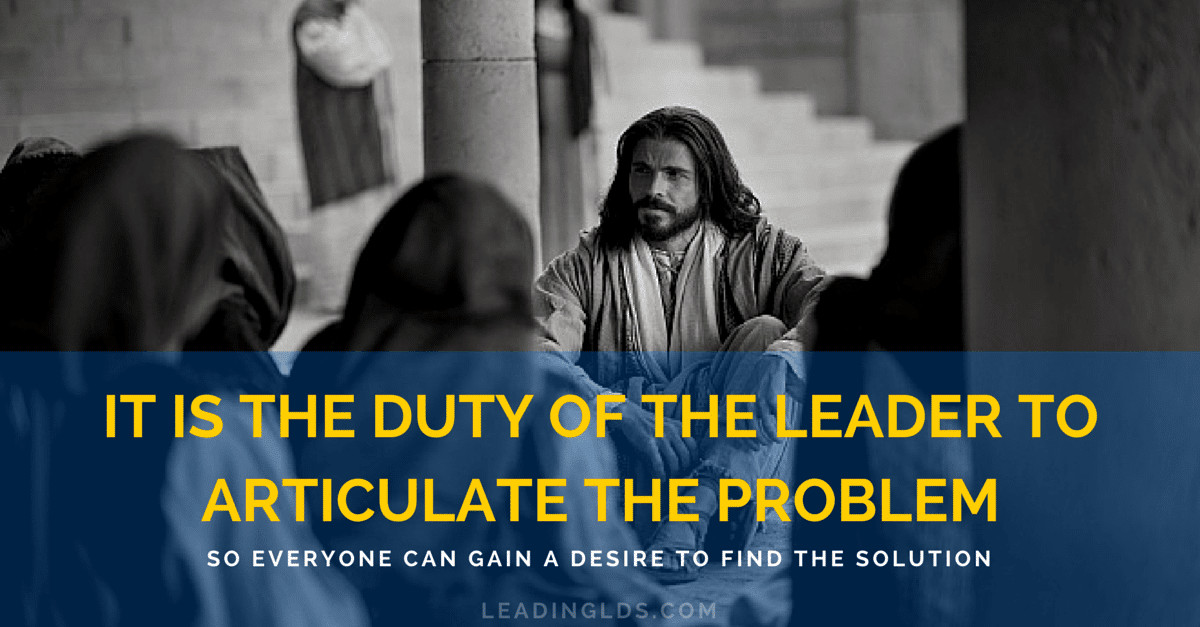 Daniel pleaded for Saul to “come down” (1 Samuel 23:11 & 20), The Lord “came down” to the valley of Nimrod to speak with the brother of Jared (Ether 2:4). There were even times when leaders refused to “come down” because they were involved in “a great work” (Nehemiah 6:3). And, of course, “God himself [came] down among the children of men.”

Leaders Must “Come Down”

Leadership has a natural tendency to put you on a higher level. Not in terms of pride or prestige, but rather, in terms of perspective. As a leader, you have a unique perspective on the status of the ward or quorum. You have the specific authority or sometimes priesthood keys that give you access to the inspiration that nobody else has. For example, an elders quorum president has access to home teaching reports, attendance reports; he has attended meetings where information about individuals or ward programs are shared. From this exclusive information, the elders quorum president might see a dramatic attendance drop between sacrament meeting and elders quorum meeting. Or while others in the quorum are doing their best to minister, the elders quorum president can look at his ministering interviews notes and notice 5 specific families being forgotten; and if they were noticed, could have a dramatic impact on the ward.

Humans tend to generalize their experience or perspective. People think that because they can see an obvious problem, everyone around them can obviously see the problem. As a leader, we then get frustrated why this “obvious” problem isn’t being seen and fixed by others in our quorum. It is the duty of the leader to articulate the problem (even the “obvious” problems) so everyone can gain a desire to find a solution. Once the quorum problem is described and the leader invites the quorum to act, those you lead will understand why this is a problem and help you find solutions.

In Abraham 3:21 the Lord “[came] down unto [Abraham] to declare unto [him]”. Abraham learned important truths of the Lord’s plan and learned that he was chosen before he was born.” This was an informative experience for Abraham. From this experience, he was able to understand his purpose and take action. He could not have gained this understanding without the Lord “coming down” and articulating it to him.

I can understand if this seems frustrating. Do we really need to spoon feed people problems? Do they really not see these “obvious” service gaps? As leaders we sometimes feel like the duty of those we lead has already been explained. We feel they clearly understand their expectation to do their home teaching, or magnify their calling. It’s true, there are general understandings that have been drilled into our heads for years (i.e. Ministering, take meals to new moms, fellowship those around you, etc.), but these are simply too general. It is crucial for a leader to explain the more detailed problems that face a quorum or group. These details usually include names of individuals struggling, or unique characteristics of your ward that may not be apparent to the arm-chair quarterbacks casually attending week-to-week. For example, a Sunday School president may know that he needs to keep an eye on things during the Sunday School hour, but he may not know that 20% of the ward is leaving before the second hour begins. Or the youth leader may know he needs to put on a Wednesday activity each week, but he may not realize Brother Larsen in the elders quorum has finally made consistent contact with a less-active family with teenage boys.

Communicating from your unique leadership perspective also humanizes the problem, which makes it more likely people will be willing to help fix the problem.

A few years ago, as I was serving as bishop, I felt a constant nudge to be more familiar with my flock. I was the bishop of a very transient ward that some months had 60 membership records leave the ward and 60 membership records come into the ward. It was very difficult to keep up on who was who on the roles. Many of these new records were less-active so from the perspective of the active ward members they weren’t seeing the reports week to week showing such a dramatic change in the ward roster. It was all happening behind the scenes and the general ward body had no idea. As the leader of the ward I had a unique perspective and it was my role to “come down” and share with them what was happening.

I knew I may never see 100% home teaching in the ward but I could at least know who everyone on the roles is. The spirit continued to prod me. One day I printed out the entire ward list and went through each name. If I didn’t recognize the name I highlighted it. By the time I went through each name on the list I had 155 households that I had no idea who they were (this was 46% of the ward membership the bishop didn’t know). This was a problem. I didn’t know how I was going to track down all 155 households. As a leader, I needed to take it to the ward and invite them to act.

The following year was full of experimenting with different ideas. We tried meeting on various nights during the week (whichever was most convenient for members of the ward). We would give everyone a list of names and invite them to go knock on their doors and determine if they lived there, and if so, if they would be interested in attending with us on Sunday. We made good progress, but then the winter months made it difficult to knock on doors in the evening when it was dark and cold. I then started printing all these unknown names on a sheet of paper and handing copies out as people came into sacrament meeting. I am still doing this practice and all members of my ward know they can expect an updated list each week. I take time during ward business to stand and draw attention to the ward find list and encouraging them to take time each week to knock on a few doors and find those brothers and sisters that are currently lost.

This has become part of our culture in the ward. It has generated excitement and commitment because everyone knows they can make a difference by knocking on a door each week. They understand the problem and they are constantly invited to take action from me as their bishop.

Those 155 unknown households have diminished to less than 30 households that are still unknown. I have no doubt we can get it under 10 households and then simply focus on the new records that come in from week to week.

This was not a task I could have done on my own. But because I “came down” and helped my ward understand the problems that we face, miracles have happened and we are focused as a ward to make a difference.

Make a habit of “coming down”

Leaders too often carry the burden of the quorum problems on their own shoulders, assuming everyone else sees the problem when they do not. It is now your duty to effectively communicate these problems to those you lead. This is done by making sure your quorum or Relief Society meeting isn’t just another Sunday school class. It’s a time for you to share problems and concerns, discuss ideas of improvement and then invite the group to take action in discovering a solution. Bishop should not be afraid to use their “ward business” time during sacrament meeting to discuss, well, ward business. Don’t casually run through the calling releasings and sustainings. Take a moment to articulate what is on your mind as the person receiving revelation. Let them know how concerned you are and how much a difference could be made by the ward taking action in simple ways. Help them know what those simple actions are. Maybe it is knocking on doors, helping the scouts with a service project, or just making more of an effort to sit by someone that is alone.

This is leadership. Go make a list of the top 3 problems that concern you as a leader and then communicate them on Sunday.