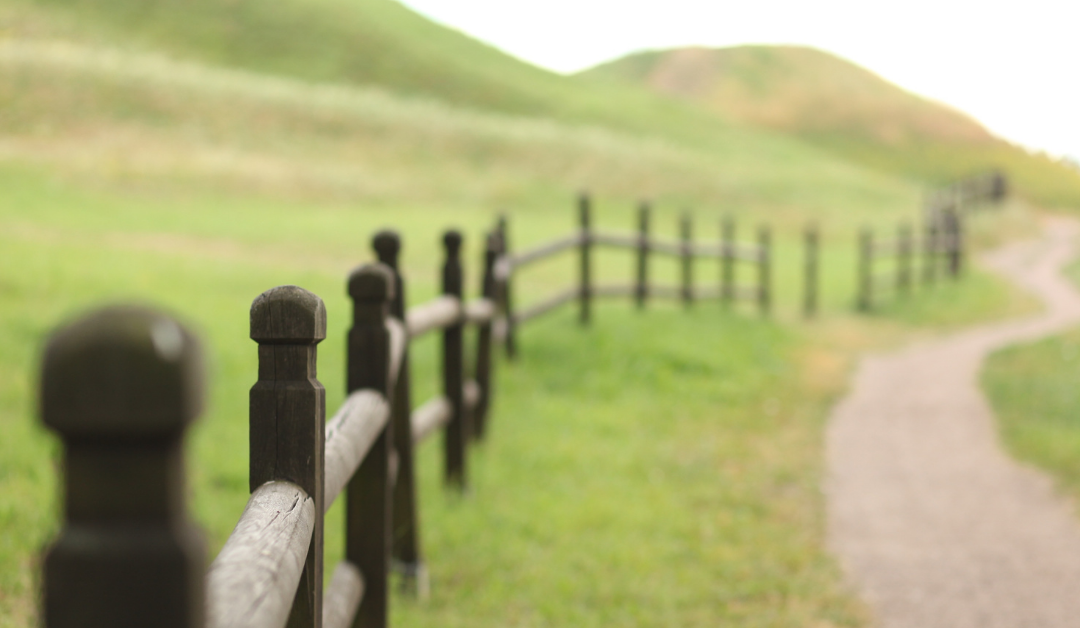 Alicia goes to the gym each Monday, Wednesday, and Friday to work out for an hour. While she could wear fuller length clothing with her garment on underneath, she feels it disrespects the garment to vigorously sweat in it and that it inhibits her workout and athleticism. On her way home from the gym she remembers she needs to run an errand, and swings into the grocery store to buy some needed food for dinner. While walking down the aisle, she bumps into a few of her Relief Society friends. They talk to her but repeatedly make glances at her shorter shorts and non-capped sleeves. One of her friends makes a loving comment saying, “It isn’t necessary to change out of the garment to work out and if I do I always change back into them immediately.”

The Value and Purpose of Fence Laws

Your answer to these questions likely depend on how you feel about fence laws. What are fence laws? Let me explain.

The phrase, “fence laws” comes from a collection of Jewish oral traditions, in which early Jewish leaders were told to “make a fence around the Law.” These leaders promoted the idea of creating a protective fence to keep people from getting anywhere close to breaking the law.

I use the term “fence laws” to describe rules, practices, and guidelines put in place to protect core laws (such as loving God and neighbor, the Ten Commandments, and laws relating to our temple recommends.)

If you think about it, fence laws can be very important. Sin and temptation are real and dangerous. Fence laws can provide important protection! Thus, a family might put up a fence law of “only use your computer in a public area of the house” to help people avoid the plague of pornography. It’s not that it’s a sin to use a laptop in a private place, but the fence law helps to prevent possible sins. In this way, fence laws can be very helpful!

But there are challenges with fence laws as well. Sometimes a fence law that works for me, might not work for you. If I aggressively promote my fence law, it may come to feel like an expectation, and for you, burdensome. Even worse, it could get to the point where I begin to start focusing on my fence law as “the law” and judge people based on their adherence to my fences.

When Our Fence Law Creates a Judging Heart

Here’s a concrete example (all names in stories are changed in this post).

Brad was zealous in his observance of the Sabbath day. He did not watch television or listen to “worldly” music, and only read church books or magazines on Sundays. He also made sure that he stayed in a white shirt and tie throughout the day. For Brad, these fences were all an important part of keeping the Sabbath day holy. When Brad lived on the east coast, he didn’t notice how other Mormons observed the Sabbath because he did not see them very often outside of church meetings. But when Brad moved to Utah, he was surrounded by Mormons, some of whom acted in ways that Brad did not approve of.

One particularly irritating incident to him was when he saw a member of the bishopric out delivering goodies to ward members on Sunday wearing shorts and a T-shirt. Brad could not believe that a member of the bishopric would show what he perceived to be flagrant disrespect for the Sabbath. There is nothing wrong with any of Brad’s fence laws—each of them could be very helpful in facilitating feeling the Holy Ghost on the Sabbath. However, Brad missed the mark by using his own fence laws to make judgments of others and ironically judged one who was trying “to do well on the sabbath days” (Matthew 12:12).

When we focus excessively on the fence, it’s hard to have peace—and we make it hard for others to have peace also.

Focusing on What is Truly Important

It is interesting to note that on several occasions, the Savior violated fence laws that the Pharisees had put in place so that he could focus on the more important work of healing.

For example, when Christ healed the lame man at the pool of Bethesda, he did it on the Sabbath. He could have done it the day before or the day after; this was not a medical emergency. The man had had an infirmity for 38 years! Christ also could have told the man to come back the next day and pick up his bed (respecting a Pharisaical fence law), but instead he specifically told the man to “Rise, take up thy bed, and walk” (John 5:8) (carrying his bed violated a Pharisaical fence law). Perhaps Jesus was purposely demonstrating to the Pharisees that their fence laws were excessive. Rather than praise God for this miraculous healing, the Pharisees criticized the man’s actions, saying, “It is the sabbath day: it is not lawful for thee to carry thy bed” (John 5:10).

On another occasion, Christ encountered a man who had been blind from birth. To heal the man, Christ “spat on the ground, and made clay of the spittle, and he anointed the eyes of the blind man with the clay” (John 9:6). Note that the Pharisees had a fence law of not spitting on dirt (and thus making clay) on the Sabbath in order to more fully honor the Sabbath day.

Because Christ clearly possessed the power to heal a blind man without needing dirt and spit together (see Mark 10:51-52), it appears he was deliberately violating a pharisaical fence law. When the Pharisees heard of the healing, some of them declared, “This man is not of God, because he keepeth not the sabbath day” (John 9:16). Think of it! In the face of an absolute miracle, they were preoccupied by a technical violation of a fence law.

Don’t Lose Sight of the Purpose for the Fence Law

On my mission, we had a fence law related to music: missionaries could only listen to music that was authored by a church member. Rumors were rampant in the mission about various heavy metal groups that purportedly had at least one member of the band who was LDS, thereby making their music “legal.” My mission president became aware of this issue, and asked my companion and me to create a list of approved music for the mission. We compiled a list of several dozen albums and artists, and I was proud of our resulting list. Surely our fence was much better than the previous one!

We were scheduled to roll out our new list of approved music at a Mission Conference, and printed out a copy for each missionary. I was excited when I learned that a member of the Seventy would be presiding at the Mission Conference. In a meeting with the general authority, prior to the conference, my Mission President told him about this list and the general authority asked to see it. I had some pride in my heart as I handed him the list and thought, “I bet my list will be used in all the missions of the church!”

He looked at the list for a minute, handed it back, and said, “Can I make a suggestion? This is a great list. But there’s one problem. New music will always be coming out and you will need to be continually updating this list.”

I hadn’t thought of that.

“Instead of giving a detailed list,” he continued, “it might be better if you taught a principle. For example, ‘We will listen only to music that would be appropriate in sacrament meeting.'”

That made sense, and the list my companion and I made was never sent to the missionaries.

Both our original rule and the list focused on a fence and ignored the core reason for a rule about music—to help missionaries feel the Holy Ghost. The principle the General Authority suggested was also a fence law but focused us on the purpose of having a rule about music. Listening to music that was appropriate for sacrament meeting was a principle that helped missionaries connect music with the type of spirit it invited into their lives, thus helping them remember the intent of the rule.

Fence Laws Could Cause Us to Miss the Mark

At times parents and leaders need to establish and enforce fence laws. But when teaching, do we focus on the fence at the expense of the underlying doctrine? A tendency to be overzealous in creating fence laws for those in our charge (for instance, children and youth we lead) is dangerous because we may become distracted from teaching principles and doctrine that will truly bring the peace that comes from making good choices.

Another challenge with fence laws is that it can cause us to miss the mark by focusing on the fence instead of what matters most. Here’s another story:

Noemi and her family had been recently baptized. During a Relief Society meeting, she was asked to read a verse aloud from the Bible. Noemi did not have a King James Version of the Bible, so she read the verse using a different Bible translation.

***Pause the story. The King James Version is the approved English version of the Bible in the church. Thus, in church meetings, this is the version that is typically (but not always) quoted. We might say that this is a fence law to protect us from less doctrinally accurate translations.***

Back to the story. As soon as Noemi read from a different Bible version, a woman publicly rebuked Noemi for not using a King James Version of the Bible. In defending the fence law, this well-meaning woman broke the core law of loving her neighbor.

When I saw Noemi after church, she was crying and said she didn’t want to return to church. To Noemi’s credit, she had the courage to keep going to church even after this difficult experience. Nevertheless, this situation should have never occurred. Sometimes fence laws cause us to miss the mark.

Questions to help us Stay Focused on Christ

Fence laws have both benefits and drawbacks. I want to be clear—when the prophet or Spirit provides us with fence laws, we should follow them, because following the prophet and the Holy Ghost brings blessings and helps us avoid the very real dangers of sin. At the same time we need to be very careful about 2 things,

When it comes to fence laws, we can each ask ourselves, “Lord, is it I?” (Matthew 26:22). Do I need more specific fence laws? Fewer? Am I missing the mark? Am I judging? What have been your personal experiences with fence laws?

What have been your experiences with fence laws as a leader in the church? How have you seen fence laws help? How have you seen them hurt? What do you think should have happened in Alicia’s situation, described at the beginning of this post? Things worth thinking about as we all strive to keep our focus on Christ and not on the fence.