What Every Leader Can Learn from King Mosiah 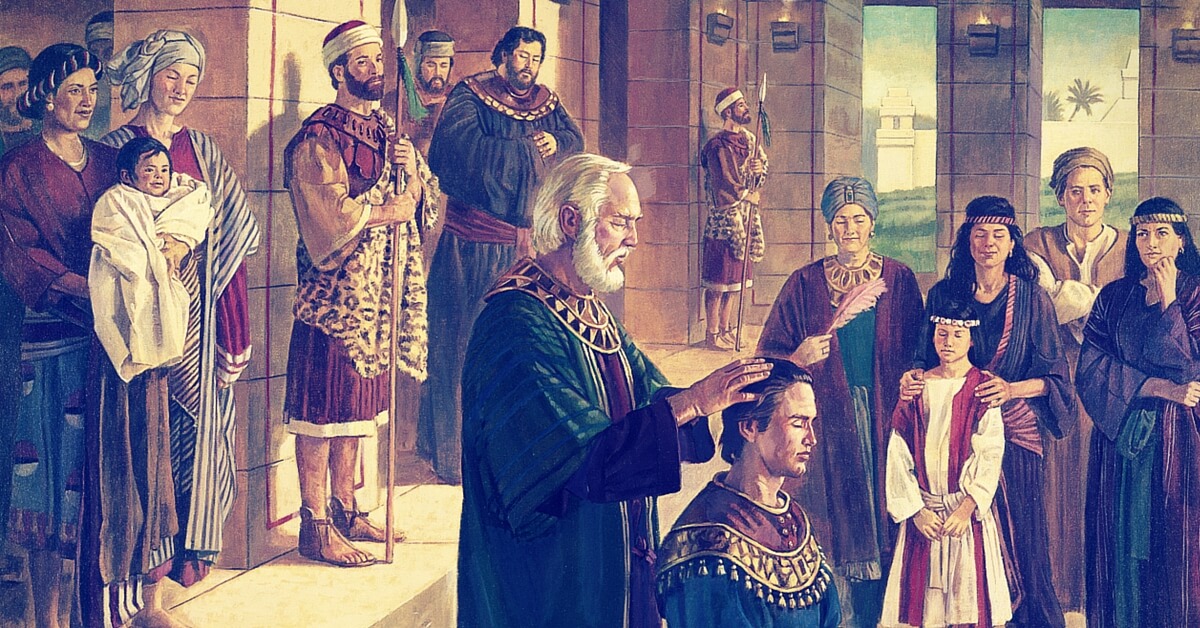 We have learned by sad experience that it is the nature and disposition of almost all men, as soon as they get a little authority, as they suppose, they will immediately begin to exercise unrighteous dominion.

In the history of the world, we’re hard-pressed to find more George Washington’s. That’s part of why he’s so revered and even deified. He could have taken a lot more power after the war, like Bonaparte and Cromwell. He didn’t. Not only did he not amass power to himself, but he even rejected consolidating too much power in the office of POTUS. The most enduring example of this is probably his refusal to put himself up for re-election for a third term. It set a precedent that was honored for well over a century afterward, and then made law in the 22nd Amendment in 1947.

Interestingly, the Book of Mormon has a number of such leaders. If that was the only history you knew (like a Nephite might) you’d probably think these sorts of leaders were somewhat common. The truth is, they’re extremely rare, and there’s maybe only a few other candidates in all of world history.

That book starts right off with Nephi, who was so beloved by his people they called kings that came after him 2nd Nephi, 3rd Nephi, and so on. The name “Nephi” literally came to mean “king” or “honored leader” among them. He was able to lead with such unselfish effectiveness, that all his people loved and revered him. He was also able to give up that power, selflessly choosing a righteous successor who was not his own descendant (it appears), before he died.

Captain Moroni also comes to mind. He had the hearts and minds of the people, and command of the army. He even marched on the Capital to overthrow the government, when he perceived a lack of ability on their part. But he doesn’t go to take over or become dictator, he simply wanted a government that would support the fight for freedom. He had no desire to be supreme ruler.

Many others could be listed here as well: Mosiah I, King Benjamin, Alma the Younger, Mormon, and others. They are these selfless leaders who had a great deal of power, but didn’t use that power for evil or in selfish ways. They only exercised that power to do the will of the Lord and help their people. They’re the ultimate leaders and absolutely deserve studying.

Mosiah II stands out in my recent studies. As a king and judge, he’s faced with 2 major controversies in his time. The first is when many non-believers are persecuting the members of the Church. His kingdom becomes divided between those who believe and those who do not.

The division occurs when many of a new generation grow up. They don’t remember king Benjamin and the things he taught, nor did they experience the captivity of Limhi’s people or Alma’s followers. They turn to wickedness and apostasy. These non-believers commit many sins, and are brought to the priests with witnesses who testify of their iniquities. The priests take them to Alma, because they don’t know what to do. This kind of widespread and public wickedness hasn’t been a problem among the Nephites before. Alma doesn’t know what to do either. So he takes them to Mosiah. In Mosiah 26:11 we read what Alma said to Mosiah:

Now, the typical leader would see this as a problem to be solved, and if he’s power hungry (as most are), an opportunity to amass more power. He’d quickly judge these people and thereby set precedent that he’s the supreme judge over all things regarding the law of the land, and the laws of God. If he’d thought of Alma as a subordinate (since he appointed him), he could have easily made it clear here, by doing the judging.

12. But king Mosiah said unto Alma: Behold, I judge them not; therefore I deliver them into thy hands to be judged.

13. And now the spirit of Alma was again troubled; and he went and inquired of the Lord what he should do concerning this matter, for he feared that he should do wrong in the sight of God.

Not only does Mosiah not take this chance to gain more power, or clarify his position “over” Alma, but he doesn’t even give Alma any advice or direction. In our modern language it’s like he says “this is your stewardship Alma, not mine, you go talk to the Lord about it. You have right to receive revelation in this matter.”

We know that Alma then receives one of the great revelations recorded in the Book of Mormon. The Lord speaks to him for some time, and teaches him many doctrinal truths, including how to judge the members of the church in righteousness. If Mosiah had just used his considerable experience and “fixed” the problem, he would have gained more power, Alma wouldn’t have learned about stewardship or the powerful lessons the Lord taught him, and we wouldn’t have the powerful revelation that follows.

Later in his reign, Mosiah is faced with another huge problem. His oldest son, Aaron, has refused to be king. He knows that if he makes someone else the king, controversy might arise around it. He also knows the great burden that is placed on a King, even if he’s a righteous one. In Mosiah 29, he writes to his people, explaining why a king is not a good idea. And there we pick up the story again:

33. And many more things did king Mosiah write unto them, unfolding unto them all the trials and troubles of a righteous king, yea, all the travails of soul for their people, and also all the murmurings of the people to their king; and he explained it all unto them.

34. And he told them that these things ought not to be; but that the burden should come upon all the people, that every man might bear his part.

Wow. That’s got to be unprecedented! A king just being super-open and laying out all the “trials and troubles” that come with being a righteous king. If you look at it cynically, it’s like he’s saying “I’m tired of taking your sins and bad choices and drama upon myself. It’s not fair to me or to anyone else to have to bear that burden. It’s time for you to take responsibility for your own actions and your own salvation.” But Mosiah’s not a cynic, and he’s saying this out of love.

It’s not that they didn’t control their own salvation before, to some extent, but the king, in a Christ-like way took some of the responsibility upon himself, just as a wicked king would. The difference is probably that the righteous king does so knowingly and purposefully, with his eyes wide open to what he’s doing.

37. And now it came to pass, after king Mosiah had sent these things forth among the people they were convinced of the truth of his words.

38. Therefore they relinquished their desires for a king, and became exceedingly anxious that every man should have an equal chance throughout all the land; yea, and every man expressed a willingness to answer for his own sins.

39. Therefore, it came to pass that they assembled themselves together in bodies throughout the land, to cast in their voices concerning who should be their judges, to judge them according to the law which had been given them; and they were exceedingly rejoiced because of the liberty which had been granted unto them.

The people see the value in what he’s arguing, and the freedom it provides. They also want the responsibility for their own actions. It says “sins” but they also get more gain from their righteousness and agency. I wonder if King Benjamin’s people were blessed and received those covenants in part because of Benjamin’s righteousness? Kind of like Moses & the children of Israel. They were offered the higher law and to see the face of God, perhaps mostly based on Moses’ righteousness. But they weren’t ready and rejected the opportunity, and so were given a lesser law.

Now stop and think a moment about what Mosiah has done. He’s not only released his son’s from the burden of being king, he’s dissolved the monarchy completely! This wasn’t some forced abdication, or beheading of a king, like we see in the 16, 17, and 1800’s in Europe. This is a king willingly giving his power up to the people. In fact, he’s the one convincing them that it’s the right thing to do! They want a king. This isn’t the American or French revolutions. The people want a king. Yet he convinces them it’s not in their best interest and sets up a system of laws and judges to apply those laws. Ultimately it’s a sort-of representative democracy, where the people are the ultimate judges and ultimately responsible for their personal and societal destiny. This is perhaps completely unprecedented in the history of the world, before or after Mosiah.

What was the result of all this? Does this kind of leadership work? Of course it does, because it’s absolutely Christ-like. But look at what the record says:

40. And they did wax strong in love towards Mosiah; yea, they did esteem him more than any other man; for they did not look upon him as a tyrant who was seeking for gain, yea, for that lucre which doth corrupt the soul; for he had not exacted riches of them, neither had he delighted in the shedding of blood; but he had established peace in the land, and he had granted unto his people that they should be delivered from all manner of bondage; therefore they did esteem him, yea, exceedingly, beyond measure.

And there it is. Mosiah is a true leader. Here’s the Christ-like attributes that stood out to me in this verse:

I could go on and on about how he implemented those desires and aims. For example, he does all this to explain to the people why they shouldn’t want a king. He doesn’t just try to force it on them, he wants people to understand. How many leaders take the time and effort to explain their actions to those “beneath” them?

There’s many great attributes here to study, and study them we should. Alma 1:1 eulogizes the then-dead king:

Now it came to pass that in the first year of the reign of the judges over the people of Nephi, from this time forward, king Mosiah having gone the way of all the earth, having warred a good warfare, walking uprightly before God, leaving none to reign in his stead; nevertheless he had established laws, and they were acknowledged by the people; therefore they were obliged to abide by the laws which he had made.

He used his position and power only to the benefit of others and according to the Lord’s will. Beyond that, he didn’t place any value in it, and gave it away repeatedly. Obviously the point of this post is that we need to be like that and not desire or seek power and authority. And when it’s given us, we should bear it with the humility that Mosiah did, always looking to give responsibility and autonomy back to those around us, rather than gathering power around our person or position. But there’s lots of other great attributes we can study in this great leader and others like him in the Book of Mormon.

Tevya writes more results of his personal studies over at SacredSymbolic.com. He’s also the chief writer and editor at MormonLifeHacker.com.