Unnecessary Sacrifice is Evil | Leaders Should Do More By Doing Less 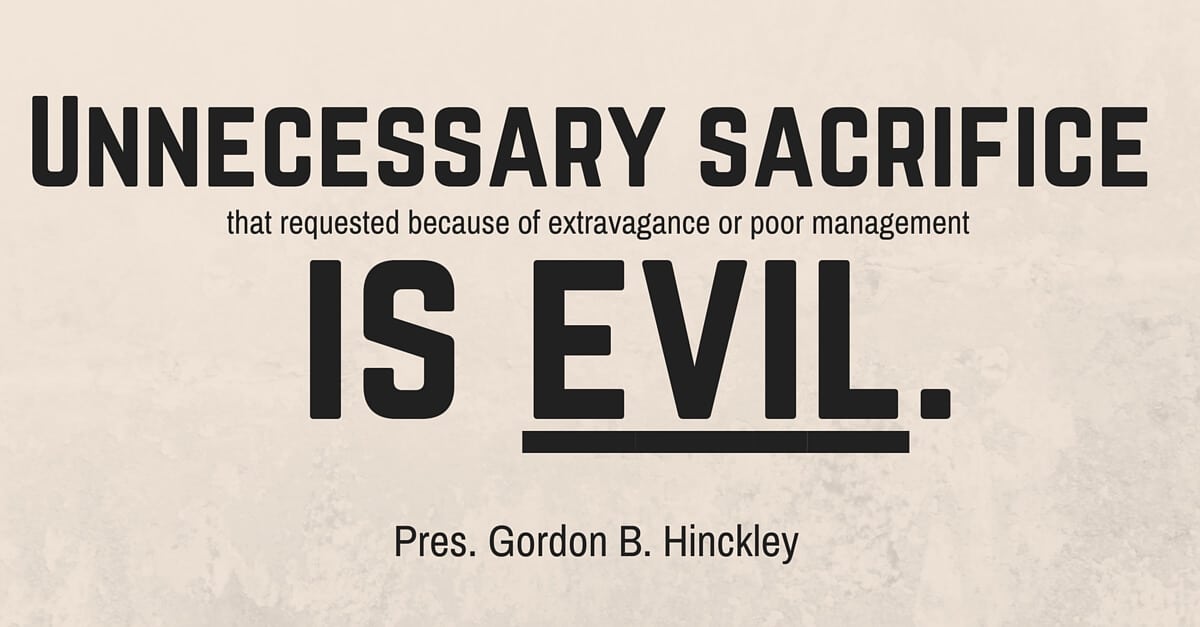 In the LDS church, leadership sometimes comes with formal responsibility through a calling or assignment. Someone newly called to positions like, bishop, Relief Society president, or ward mission leader, might find themselves subject to a life of limited time. The reality is, most callings in the church will take as much time as you are willing to give—even more if you aren’t careful. Every minute that callings take rarely seem wasted. That is what is so hard about time management in church callings; it always feels like time well spent.

I remember being called as a elders quorum president in a young single adult ward where I met my wife. Late at night, I found myself sitting in a clerk’s office organizing the ever-changing home teaching assignments. It was essential, so I thought, to put in the time to get the assignments organized so that I could be ready for the next month when even more changes would come. It consumed my time as elders quorum president. It was to the point where I didn’t do much of anything else. Not only did I have no idea how to delegate, but I was also fighting a battle of time that would never be won.

One trait of a strong leader is being able to step back, with a spirit of contentment, realize there isn’t enough time to do every worthwhile thing. By focusing on one priority you avoid another priority. Then there is another priority waiting after that, which is in the way of another priority. There are times I have found myself ranking a priority above other more important priorities, such as family time, simply because it is easier, or the consequences of those priorities are the most obvious to the public eye.

In April conference of 1981, Bishop Victor L. Brown addresses this concept perfectly by quoting President Gordon B. Hinckley on “the evil of unnecessary sacrifice.” Take a look at a clip from his talk:

I should like to say that sacrifice, where needed, is an important aspect of the gospel. It is of the very essence of true worship. But unnecessary sacrifice, that requested because of extravagance or poor management, is evil.

Unnecessary sacrifice is evil. Wow. The word “evil” seems like a strong word for poor management. However, in this instance, that word is strong enough to make a point. It should give leaders pause to reevaluate how they are organizing their time, their meetings, their appointments, and any other form of sacrifice.

This point is even more valid when it comes to local leaders in the Church. I have no doubt they are inspired, they hold authority to preside, and they are called of God. However, it worries me when such good men and women fill their time with unnecessary tasks that appear urgent. They misinterpret a meeting for serving. They confuse long hours at the church with magnifying a calling. They become powerless to say, “NO”.

When I wrote the article, The 7 Unbreakable Rules of a Church Meeting, I got a lot of dissenting feedback. Passionately dissenting feedback. Individuals felt like I was diminishing the presence of the spirit in leadership callings. I understand why they are so frustrated with such an article when I challenged their mode of operation in their callings. I do not write such things to be critical, but rather to challenge them to achieve higher efficiency This can be done by finding better tools, and to by revisiting their approach to their leadership. Having meetings, holding appointment, organizing lists feels so good because it give the impression that you are making a difference. When in reality, it may be an addiction.

The demands of bishop or Relief Society president, or any other leadership calling, will make you weary. However, we have been promised our leadership will “sanctify and renew our bodies” (Doctrine & Covenants 84:33). I am willing to bet that most leaders in the Church can cut their schedule in half and still have double the impact they are having now.