The Law of Common Consent 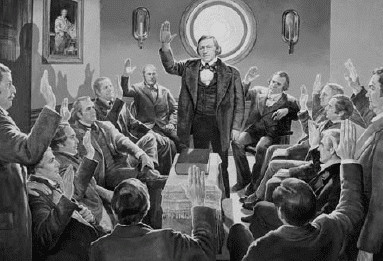 “No person is to be ordained to any office in this church , where there is a regularly organized branch of the same, without the vote of that church;” (D&C20:65)

When the bishopric presents a name to be sustained in sacrament meeting most people in the congregation may be assuming that the person of authority at the pulpit is asking for each person’s “support” for the person being called. So if a primary teacher is sick one week you will gladly help her by teaching her class because you raised your hand way back when she was called….right? Well…sure…it’s a way for you to show your support, but there is more that is being asked while a sustaining vote is taken.

The various officers of the Church are nominated by those holding the proper higher office in the organized Church; then submitted to the people for approval or disapproval…However, the name of the person so appointed must be upheld by the ‘confidence, faith, and the prayer of the Church’ (DC107:22)

So the bishopric or stake presidency is not telling you who is going to be called, rather they are nominating a person to fill the calling. They are asking for the congregation’s vote…their sustaining vote.

Every officer of the Priesthood or auxiliary organizations, though properly nominated, holds his position in the Church only with the consent of the people. Officers may be nominated by the Presidency of the Church, but unless the people accept them as officials, they cannot exercise the authority of the offices to which they have been called. All things in the Church must be done by common consent. This makes the people, men and women, under God, the rulers of the Church. Even the President of the Church, before he can fully enter upon his duties, or continue in the office, must be sustained by the people…This gives every member an opportunity to vote for or against the officers. Meanwhile, the judiciary system of the Church is such that there is ample provision whereby any officer of the Church, if found in error, may be brought to justice and if found guilty be removed from his position.

Finally, a sustaining vote is taken in order to maintain order in the church.

Again I say unto you, that it shall not be given to any one to go forth to preach my gospel, or to build up my church, except he be ordained by some one who has authority, and it is known to the church that he has authority and has been regularly ordained by the heads of the church. (D&C 42:11)

So the next time you raise your hand in sacrament meeting, realize you are voting not just stretching.